This article on exercise and flexibility is by Elliot Dyson, a part time contributor to DrumSauce.com, and all around good drummer and good man.

“Drummers are party animals, man!” “Being a drummer must be awesome – you get to sit down at shows and get wasted.” Admittedly, being a drummer can be awesome, though it can also be a hellscape of our own creation. 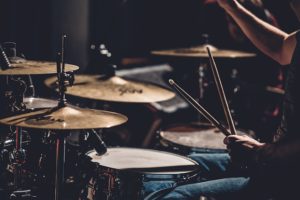 So often, we drummers get painted as these debaucherous beings, void of any thought other than where the next line is coming from and I really don’t know where this stereotype has come from. Because like, 3 drummers have overdosed in the entire history of time?

I still get this all the time at shows. People will come up to me – and mind you I do not look like a party animal, but more like a guy who checks his tire pressure before every single car journey – and accuse me of being of a fiendish sort, on my way to the bar to down a few drinks.

As you and I know, being a drummer is god dang hard and we’ve got to increase our stamina if we want to play rad stuff for 2 hours straight, which is why all my bands songs just feature a straight 8 beat.

When I was at college, we were trying to play a Foo Fighters song, which have a little bit more going on in them than you might realize. My tutor stopped us mid-rehearsal to single out me – the only band member who had actually learned the song and prepared, as opposed to looking at a tab once – to politely inform me that I was letting the side down because I wasn’t loud enough.

Telling a drummer they aren’t loud enough can be a dangerous game, but he was right. He genuinely assigned me the homework of lifting weights, which I am thrilled to inform you that I didn’t do and, in turn, only received a B grade at that performance. However, I would like you to learn from my past mistakes – there’s room for exercise in your life. You might not think so amidst all your rudiment practice or whatever, but I guarantee you can find the time,

You Have To Stretch!

As the heading suggests, I’m an avid proponent of stretching because I don’t want you come down with repetitive strain and never drum again. I remember making fun of people at college who stretched before they played, but you know what?

Those guys knew the secret. If you stretch before playing, you’re already partially warmed up and closer to being at your performance peak.

Before you sit down, spend a couple of minutes stretching your fingers, wrists, feet and ankles. These are all real straightforward stretches. For the hands, keep one arm straight and, using the other hand, pull your fingers back towards your body, going as far as to feel a stretching sensation, but obviously, don’t hurt yourself.

Place your foot at a 45 degree angle against a wall and just lean forward, putting some weight on it. Repeat both with the opposite limbs and you’re stretched, buddy.

Spend another 5 or so minutes completing basic warm up exercises before playing. For example, play some consistent one handed quavers, then doubles and so on. This is stuff you should have done before, so I won’t spoon feed you. All I’m trying to do is remind you to actually warm up before you play, lest you over exert yourself in the first few minutes of playing and damage your fragile little self.

This is a long term goal that I can’t expect you to go out and complete today, but ensure you’re using a supportive throne, experimenting with the right height of your set up to not feel strained when reaching. Slouching is an absolute killer for drummers, especially if it becomes a habit – you could find yourself laying on the floor between tracks to try stretch away the pain. A little work every time you play will be far surpassed in irritation when you can’t get out of bed properly every day for the rest of your life. I’m not trying to be dramatic – you should see me trying to get out of bed (you really shouldn’t).

Why Spend Any More Money?

As drummers, we should exercise, but by no means am I telling you to go and fork out for a gym membership like it’s New Year’s Day. Just walking for 30 minutes a day is a good start for stamina building, and if you need to play a Foo Fighters song louder, maybe do some press ups or bench press the family dog.

How to Make Money Playing Drums!

Songs To Play Drums To!

How To Play with Other Musicians!

This website uses cookies to improve your experience while you navigate through the website. Out of these, the cookies that are categorized as necessary are stored on your browser as they are essential for the working of basic functionalities of the website. We also use third-party cookies that help us analyze and understand how you use this website. These cookies will be stored in your browser only with your consent. You also have the option to opt-out of these cookies. But opting out of some of these cookies may affect your browsing experience.
Necessary Always Enabled

Any cookies that may not be particularly necessary for the website to function and is used specifically to collect user personal data via analytics, ads, other embedded contents are termed as non-necessary cookies. It is mandatory to procure user consent prior to running these cookies on your website.

How To Sell Drums Online!

So, you have some drumming equipment you want to sell? – Great! There are a whole lot of people out...